When is a Deck Overlay Applied to a Bridge Deck? 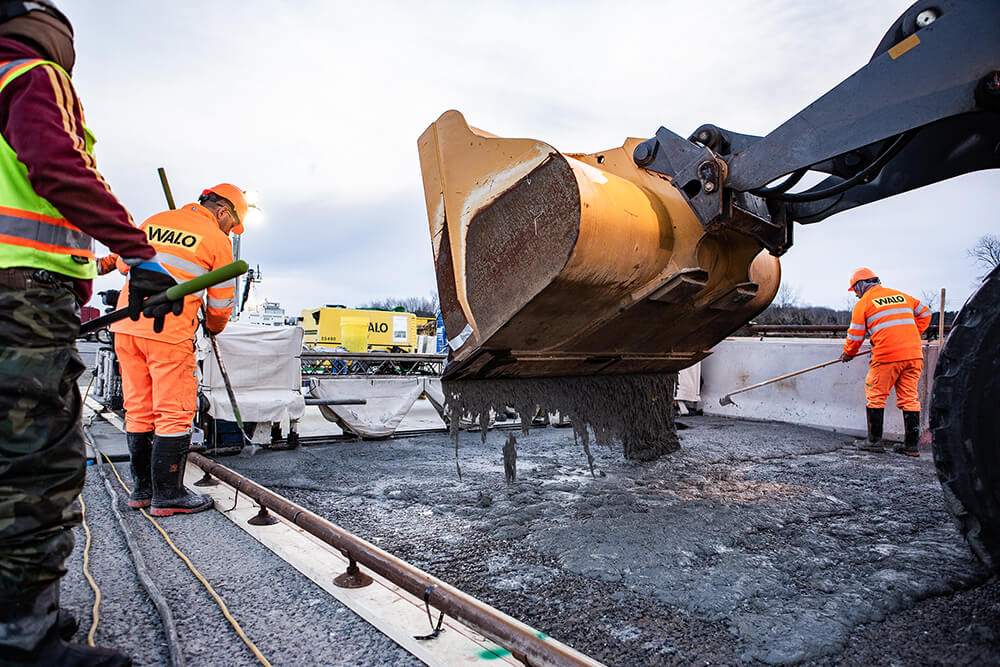 Bridge deck overlays are most often used on existing bridges when their decks require rehabilitation, or when there is a lack of coverage of the deck’s steel reinforcement. However, bridge deck overlays can be applied for several applications and for a variety of different reasons.

For example, a deck overlay can be placed on a new bridge in order to provide a more durable wearing surface and to add a protective layer against deicing salts. This may give the deck longer service life and sustainability, as it prevents chloride ingress from affecting the structural integrity of the deck.

Overlays can also be used as a preventative measure on existing decks that are in good structural condition, but where the top layer of the deck has deteriorated due to excessive use, impact loading of trucks, or other challenging environmental conditions.  If  the entire deck is still structurally sound and if the structure will continue to be exposed to the challenging elements for some time, an overlay can help extend its service life and can enhance its long-term durability performance in a cost-effective way.

Most importantly, an overlay can help to avoid the need for a major repair procedure such as a full-depth deck replacement although full deck replacements result in brand new, long-lasting structures, they are oftentimes more costly. There are three possible options when an overlay may be applied to bridge deck overlays:

Choosing an Overlay For a New Deck

Chlorides from deicing salts are the main cause of bridge deck deterioration. Over time, they can penetrate through the concrete deck and corrode rebar, resulting in damage of the structure.

Two types of protective waterproofing to consider for a new deck may be: an asphalt overlay or a thin polymer overlay.

The asphalt technique involves the installation of a waterproof membrane with a layer of  hot mix asphalt (HMA). Although this option is economical, it results in a fairly short service life, especially for a high-traffic bridge structures — about 5 to 10 years before further rehabilitation or removal.

Polymer overlays are applied to deck overlays to form a seal and prevent corrosive chlorides from penetrating the concrete. They can also be used to improve skid resistance by mitigating the damaging effects of vehicles.

Although polymer overlays are effective in reducing corrosion, they are not as suited for small bridges with low traffic as they are with major roads where maintenance work is more challenging. Furthermore, they may not be effective if chloride contamination is already present.

Choosing a Protective Overlay For an Existing Deck

Overlays made from latex-modified concrete (LMC), were originally developed in the 1960s and over 10,000 bridges have been successfully rehabilitated across the US. LMC overlays have much lower chloride permeability than conventional concretes, but takes longer to attain the required strength to open the bridge to traffic. An LMC overlay also requires specialized equipment, an experienced contractor, and good weather conditions.

Micro silica is a by-product of the manufacturing process of silicon and ferrosilicon alloys. One primary benefit of a silica fume overlay is that it typically has very low permeability. The challenges of using silica fume overlays are that they are a somewhat stickier mixture while mixing and placing the overlay, and they require special curing procedures to reduce shrinkage cracking of the overlay. In addition, silica fume overlays require bagged additions of silica fume to the ready-mix concrete truck, or a special storage tank at the concrete plant.

UHPC has been used a protective layer for existing bridges in the U.S. UHPC has a very low permeability and is very resistant to freeze–thaw damage. Thus, the potential for ingress of contaminates and freeze–thaw damage is significantly reduced compared with conventional overlay materials, which enhances durability. UHPC is known for having high strength and high stiffness. Thus, a thin layer can provide both enhanced durability and increased strength with minimal added dead load.

Choosing a Structural UHPC Overlay For an Existing Deck

One final consideration to contemplate is the use of a structural UHPC overlay instead of a full bridge deck replacement. By adding steel reinforcement to the UHPC overlay, the structural capacity of the bridge deck is enhanced while the rebar is embedded in highly protective UHPC layer.  This type of repair solution is often more economical and beneficial than extensive external pre-stressing and/or conventional concrete rehabilitation with an increase in dead load on the existing structure.

Did you know?: The largest UHPC overlay application today was necessary to structurally enhance an existing viaduct. The Chillon Viaduct was repaired with a structural UHPC overlay to increase the bridge capacity by 40% and to improve the durability of the structure.

Due to innovations in high-strength steel microfiber reinforcement, superplasticizers, and supplementary cementitious materials, UHPC offers several advantages over conventional deck overlay solutions. UHPC is much more durable than conventional concretes, and it has been proven to extend service life in almost every application.

As an overlay material, UHPC has low permeability against deicing salts and good resistance to freezing and thawing damage. This makes it ideal for protecting a deck against contaminants. It also has good abrasion resistance, low shrinkage, high strength, and excellent bonding attributes.

As an added benefit, UHPC is much more affordable than a full deck replacement, even though it may have a slightly higher upfront unit cost. Most importantly, it extends the service life of bridges much longer than conventional solutions, which saves significant funds in the long term

Contact our experts at UHPC Solutions today to learn how UHPC can help you avoid costly deck replacements.